Lithuanian Anzacs on the Western Front #2

This post continues with those servicemen who appear to have been of ethnic Lithuanian background.  Clicking on their names will take you to their service record held by the NAA;  much of the additional information is courtesy of Elena Govor's Russian Anzacs project, http://russiananzacs.net/

Adolph Ignatieff MISHKINIS/Adolfas MIŠKINIS. Born in 1889 in Zarasai he left home aged 13, became a seaman, and lived and worked in the USA and Canada.  He arrived in Australia in September 1915 and enlisted almost immediately, in November 1915 in Melbourne, serving as a private and lance corporal in the 5th and 46th Battalions in France, Belgium and England.  Severely wounded in action in 1916 and 1917, he was returned to Australia in 1918 and medically discharged later that year.  Adolfas was naturalised as a British subject in 1919, married May Curtayne in the early 1920s and raised a family.  His two sons went on to serve for Australia in the Second World War.  Adolfas settled in Ballarat where he died in 1957.

Anthony (Antanas) PURIS.  Born in 1888 in the village of Padustis (not far from Zarasai), he was working as a miner at Newcastle NSW when he enlisted in July 1915.  Anthony served as a private in the 19th and 4th Battalions in France, was wounded in 1916 and killed in action in May 1917.  He was survived by two brothers in Padustis village (Padusčio kaimas); his service is commemorated at Villers Brettoneux in France and the Australian National War Memorial.

Stanislaus URNIARZ/Stasys URNIEŽIUS.  The following is abridged from my post of 2 April 2015 on Lithuanian Anzacs in Egypt and Palestine: 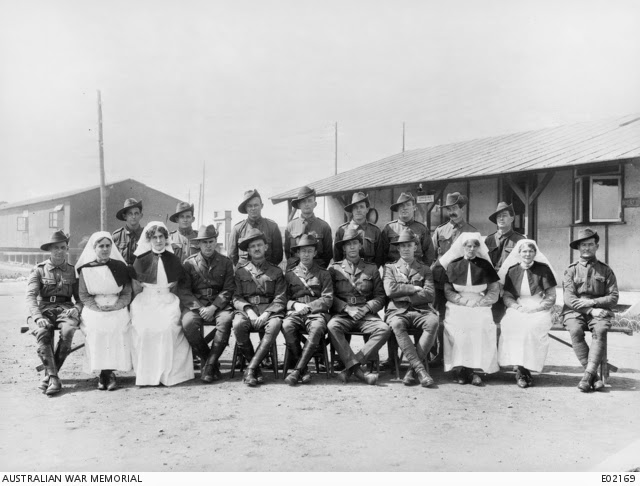 Born in Vilnius in 1874, Stasys arrived in Australia with his wife Elzbiet/Elizabeth aboard the Ophir in April 1904.  He worked as a tailor in Sydney and was naturalised in 1906.  At he outbreak of World War One, even though he was already 40 years of age, he enlisted and embarked for Egypt in November 1914, serving with the Australian Army Medical Corps at No 2 Australian General Hospital in Cairo until March 1916 when the hospital was transferred to France. He remained in France and England until the middle of 1919, returning to Sydney together with his wife in July 1919.  They left Australia together in late 1920 for England and then Lithuania.  The photo opposite, courtesy of the Australian War Memorial's collection, shows that Pte Urniarz (back row, 8th from the left) was a staff member of the hospital's operating theatre and X-ray department while in France.

Stanley (Stasys) ŽYGAS.   Born in 1886 in the small town of Surviliškis, he left Lithuania in 1907 and made his way around the world as a sailor visiting Germany, Argentina, England and finally reaching Port Adelaide in 1911.  He became a naturalised subject in 1915, worked in South Australia and Tasmania as a sailor, then an agricultural labourer, handy man, and finally as a fitter and turner before enlisting in Adelaide in September 1917. Stanley served with the 32nd and 50th Battalions on the Western Front, married Kathleen Green in England and they returned to Australia in December 1919.  He became self-employed, operating a mechanical workshop 'Zygas and Son' in Adelaide and died in 1975.  The link here will take you to a WW1 era photo of Stanley at the Russian Anzacs site.


Sources:  NAA and Russian Anzacs.  Additional material courtesy of Ancestry.com; AWM; and Metrastis No 1.
Posted by Jonas Mockunas at 13:00