The Australian Lithuanian publication Užuovėja ('A Shelter from the Wind') was published monthly in 1949 and 1950, initially at the Bathurst Migrant Camp and later from Sydney. The 1950 calendar for subscribers included a short article on Lithuanians in Australia (p85) from which I have extracted the following snapshot of knowledge and views from 70 years ago: 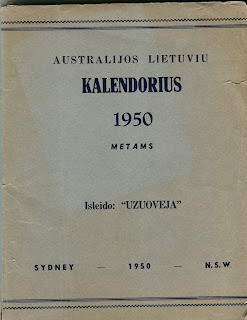 As far as we know, the first group of Lithuanian migrants arrived in Australia at the end of the 19th century, settling initially in Adelaide. They had established a mutual-aid society there but after a few years the community dissolved as members moved to settle elsewhere in Australia.

A new wave of migrants arrived after the First World War. It is believed that around a thousand people arrived in the interwar years, mainly from Lithuania and Scotland. They were also scattered around Australia, although a larger number settled in Sydney and its environs. The people in Sydney established an Australian Lithuanian Society, which later received newspapers through the Lithuanian government's Society for Assistance to Overseas Lithuanians. Even now there are over a dozen families from that migration who continue to participate in community activities, largely because of the efforts of Mr Bauže who has been president of the Society for close to 20 years.

Nevertheless the fact that today we can only count a few dozen active community members out of 1000 arrivals is a sad and sobering thought. Now we are expecting another modest influx of migrants. Official figures as at September 1949 show 4800 new Lithuanian migrants in Australia; optimistically this figure may grow to around 7000.

At present our communities and lively and energetic. Nevertheless, many are forced to work in isolated parts of the country; especially disturbing is the lack of [Lithuanian] educational facilities for our young people. In the author's opinion, our community leaders should work up a broad plan now to address the likely future erosion of our numbers.


Posted by Jonas Mockunas at 17:39 No comments: