We know that some emigrants from Lithuania also made their way to Australia via the Far East before the First World War in parallel with those from Ukraine described by Elena Govor in her 2017 book Falling Stars: an earlier blog post linked here lists examples including the Anzacs Bronislaw Kretovitch from Vilnius and Sigismund Romaszkiewich from Krekenava. To these we could add the Anzac Stanislaus Urniarz (Stasys Urniežius) from Vilnius who arrived in 1904 from Port Arthur, China. However the majority of Lithuanian Anzacs appear to have arrived from Europe or the USA.

Another case study from Falling Stars is that of Reuben Laman Rosenfield who was born in Raseiniai, Lithuania, in 1872 and grew up in Simferopol, Crimea, before emigrating to Australia in 1888 with his Jewish family via Port Said in Egypt.  Reuben Rosenfield (he later changed his name to Rosefield) studied medicine at the University of Melbourne and served as a major in the Australian Medical Corps during WW1, first in Egypt and then Britain.

The story of Edward Charles Phillule (Piliulis) also has parallels with some of those in Falling Stars; see an earlier post here.  He arrived in Brisbane in July 1914 on the St Albans from Japan together with 20 or so other 'Russians' and by the next year had settled near the Immigration Depot, in South Brisbane - which Falling Stars notes included a sizeable 'Russian-Ukrainian-Jewish' community. E.C. Phillule is likely to have participated in some of that community life: he and his wife Lydia lived for at least a few years on the corner of Hope and Melbourne Streets in South Brisbane (directly opposite today's Brisbane Convention and Exhibition Centre).


Phillule gave his occupation as shopkeeper, but he can also be found in newspaper advertisements of the time as a landlord. An interesting conjunction is that Elena Govor notes that 'A Russian family from Odessa with the English surname Douglas opened a 'Russian' fruit and grocery shop on the corner of Melbourne and Hope Streets and supplemented their income with boarders' (p37); while there seem to have been several stores on that corner at the time, it may be that the Phillules were associated with the Douglas business. The Telegraph of 31 May 1916 records that E.C. Phillule was one of several shopkeepers fined in the City Summons Court for having kept their businesses open after hours.
Posted by Jonas Mockunas at 12:36 No comments:

A new book appeared earlier this year which I think would be of value to anyone interested in late nineteenth/early twentieth century migration from the former Russian empire to Australia. Dr Elena Govor's Falling Stars: the story of Anzacs from Ukraine is an exploration of these migrants viewed through the prism of the First World War.

The men with origins in Ukraine who served in the Australian Army 1914-18 were a diverse group - they included ethnic Ukrainians, Jews, Russians and others - whose individuality as well as collective identitiy is brought out through a narrative with numerous biographical sketches. Many of these stories could easily have had Lithuanian parallels. 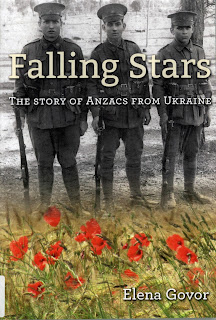 Falling Stars examines the stories of 136 Ukrainian-born Anzacs. Although some arrived here in the late nineteenth century, most arrived in the few years immediately preceding World War One: this 'reflects the general pattern of emigration from the Russian Empire to Australia'.

The most common route for emigrants coming from Ukraine was via Siberia and the Russian Far East: 'nearly half of the natives of Ukraine arriving in Australia 1910-1915 took this route'. They tended to travel via Harbin, a Russian city in northeastern China, and then Japan 'from where Japanese steamships plied the Australian route, calling at Darwin, Cairns, Townsville, Brisbane, Sydney and Melbourne'. Most immigrants disembarked at Brisbane. 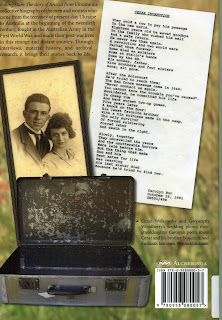 I was particularly interested in some of the background material in the book, such as the reasons for the growth of emigration through the Far East and the role played by the city of Harbin. Another fascinating story was the development of a 'Russian-born' immigrant precinct around the old Immigration Depot in South Brisbane.

Some of the biographical stories in this book are inspiring or even amazing (such as that of Alexander Sast who was captured by the Turks at Gallipoli, but then escaped from a POW camp in Bulgaria and made his own way across Russia to join the British forces at Archangelsk). Many are melancholic or sad, as some veterans were later affected by war trauma or others became victims of twists of fate (such as Alexander Sank, a veteran of the Western front who decided to return to his family in Harbin only to be arrested some decades later and sent to the gulags).

Posted by Jonas Mockunas at 12:38 No comments: