During the Second World War Australia operated a system of internment camps where 'enemy aliens' as well as anyone assumed to pose a security threat could be imprisoned without trial. The arbitrariness of internment was one of its key features: while there were around 45,000 people in Australia who had been born in 'enemy' countries, there were only around 12,000 civilian internees at the peak of the internment process (1942). Naturalisation as a British subject was no protection to internment under the National Security Act 1939; your ethnic heritage, political convictions, where you lived in Australia, the local authorities' interpretation of the regulations under the Act, personal jealousies, professional rivalries all played a part in the search for the 'enemy within'. Here are a few examples of that process, as it was applied to Lithuanian immigrants.

Kazys Brazauskas and his family arrived in Australia in 1927 and settled in a rural area near Sydney (see earlier post here). The National Archives of Australia website shows the results of the investigation of the Braz family by Military Police Intelligence in late 1940/early 1941 following a complaint by an unidentified local informant.
In brief, the informant had claimed that:
The police considered the informant to be reliable and proceeded to make their enquiries. Fortunately, they concluding that:


David Karl Pallaks (Paliokas), Brisbane and Bundaberg, QLD - born in the wrong place
Born in 1893 in Ventė on the Baltic coast, David had arrived in Australia in 1927 as a Lithuanian citizen. He worked in Brisbane and Bundaberg as a tailor, operating a shop in Bundaberg with stock and fittings valued at 250 pounds and owned a motor vehicle. In 1939, still a single man, he began the process for applying for naturalisation.

Unfortunately for David, the town he had been born in had been part of Prussia until the end of World War One. It became part of independent Lithuania only in the early 1920s. He was also Lutheran. Perhaps worst, he had seen service in the German navy in 1917-18. It did not matter at the time whether he had been conscripted into service or volunteered; he was arrested in September 1940 in Bundaberg. Despite lodging an objection, he was interned in Queensland and then at Tatura, Victoria, until April 1944.
After his release, David settled in Melbourne. He was present to welcome the first group of post-war Lithuanian arrivals on the Melbourne wharf in December 1947. David Pallaks died aged 84 in 1978.
Ernest Edward Rooste, Sydney, NSW - a victim of overzealous policing

Ernest had arrived from Shanghai in 1926 as a Lithuanian citizen but soon satisfied the requirements to become a naturalised British subject (1932). He had been born in 1896 in Kaunas to Russian parents but subsequently applied for and been granted Lithuanian citizenship. He trained as an engineer, working in Siberia for 2 years and China for 7 years, and had married a Russian girl from Ekaterinburg prior to emigrating to Australia.
He was a professional man, employed as an chartered engineer in Sydney; in 1940 the couple were able to purchase a house in Strathfield for 1,325 pounds. Nevertheless, his good standing in the community did not prevent his arrest as an enemy alien.
War was declared on 3 September 1939. Although Australia's National Security Act 1939 was only passed by the Parliament on 9 September 1939, the NSW police had already arrested Ernest Rooste as an enemy alien on 4 September. Suspicion had fallen on him because of his past - he had served as a commissioned officer of the Russian Army for 5 years and his father had commanded a Russian artillery brigade during the First World War. Fortunately for Ernest, the authorities quickly realised their mistake (he had no connections with Germany) and he was released on 10 September 1939.

Born in 1898, Max had arrived in Australia in the 1920s. He was working at Port Pirie (South Australia) in 1928 as Max Martynas Korallus and by the late 1930s had settled on Sydney's Northern Beaches where he was self-employed as a tomato grower. He was a single man, and Lutheran. Despite having Lithuanian citizenship and arguing that he was the subject of mistaken identity, he was arrested as an enemy alien in June 1940; Max may have been a problematic suspect, as he claimed he had no knowledge of his place of birth, nor his next of kin, and he had been involved in several disputes with his neighbours. Whatever the justification, he was interned as an enemy alien and transferred to the Tatura camp in late 1940.
In April 1941 Max was admitted to Mooroopna hospital with pulmonary tuberculosis, but died there a week later.  His memory is commemorated on the Commonwealth War Graves Commission's site www.cwgc.org.

Posted by Jonas Mockunas at 21:37 No comments:

The Platers in Australia

Many Lithuanians and Poles will know the story of Emilia Plater (Emilija Pliaterytė in Lithuanian) a young countess of the Plater nobles who gained immense popularity and was likened to Joan of Arc because of her participation and leadership during the 1830-31 uprising against the Russian Empire (click here for an outline of her story).

Far fewer people are aware that some of Emilia's relations, who also took part in the attempted revolution, arrived in Australia as political refugees and settled here.

Historical accounts vary, but most maintain that the history of the Plater dynasty began in Westphalia (Germany) in the 12th or 13th century, in the vicinity of the castle Broel. From that time, the family were known as 'de Broel Plater'. In the 1400s the Platers emigrated to Livonia (present-day Latvia and southern Estonia) and soon became powerful members of the Livonian Order (a branch of the Teutonic Knights). Over time, the family split into several lines; with the decline of the Order they identified as patriotic military leaders in the Grand Duchy of Lithuania and the Polish-Lithuanian Commonwealth. When the Commonwealth declined and was partitioned near the end of the eighteenth century by its more powerful neighbours (Prussia, the Austro-Hungarian Empire, and the Russian Empire) the Lithuanian regions were incorporated into the Russian Empire. The Platers maintained their extensive landholdings but lost much of their political and military influence (prior to that the Platers had ranked close to the top ten wealthiest families of the Commonwealth, assisted by marriage alliances with other powerful dynasties including the Radziwills (Radvilai)).

Emilia de Broel Plater (1806-31) was a 13th generation descendant of the original emigrants to Livonia and a member of the Dusiat branch (Dusetos, in north-eastern Lithuania). One history of her involvement in the uprising states that her third cousins Lucien and Ferdinand, who were officer cadets with the Russian Imperial Army in the fortress of Dunaburg (Daugavpils, in south-eastern Latvia), admitted Emilia into the conspiracy to stage a revolution against Russian rule. They had grown up together at the Liksna manor near Dunaburg and the brothers had already helped Emilia develop skills in shooting and swordsmanship.

The insurrection began in November 1830 in Warsaw and spread through most of the Russian-occupied areas of the former Commonwealth. Emilia joined the uprising in March 1831 at Dusetos and was part of an unsuccessful attempt to capture the Dunaburg fortress. The uprising had a number of initial military successes, taking possession of several Lithuanian towns, Emilia was appointed to the rank of Captain of the revolutionary army and distinguished herself in battle, but by the end of 1831 the uprising was eventually quashed by the regular army. She chose not to flee to the west and died while in hiding in December 1831; she was buried under an assumed name at Kapčiamiestis (in southern Lithuania).

Counts Lucien Stanislaus (1808-57) and Ferdinand (1811-91) de Broel Plater were members of the Kurkliai (in north-eastern Lithuania) branch of the family. Their father had been a Marshal of the Polish-Lithuanian nobility in the district of Vilnius and their mother Rachel Kosciuszko was the niece of the famous Tadeusz Kosciuszko (click here for his biography) after whom Mount Kosciuszko in Australia was named. The brothers joined the insurrection in April 1831 but after it collapsed made their way to western Europe. They were sentenced in absentia by a court in Minsk in November 1831 to be deported to Siberia.

After a few years in France and then England, Lucien married Charlotte Price Duffus from an old Scottish family. Together with Ferdinand, they emigrated to Australia in 1840 and settled in Liverpool, NSW. According to family tradition, expected grants of land were not obtained because the brothers were not prepared to become naturalised British subjects.

Lucien and Charlotte lived modestly in and near Parramatta. Charlotte's brother, the Rev. John Duffus, had arrived in Australia shortly before the Platers and in later years the family was strongly associated with St John's Church of England in Parramatta, where Lucien was buried. They had ten children and their descendants in Australia are estimated to number over a hundred; the Plater descendants (named Plater or de Plater) are now more numerous in Australia than in any other country. Lucien honoured the memory of his cousin Emilia by giving her name to his eldest daughter Emily Laura (1838-1926)  and also one of his sons, Emilian Casimir (1851-1926).

Ferdinand did not marry. He was naturalised in 1860 and and eventually established a home, garden and vineyard near Bargo, NSW.

'The Platers of Parramatta' in Puls Polonii (Australian Polish online gazette of 6 February 2006 and subsequent editions).

Posted by Jonas Mockunas at 13:08 No comments:

The Platers in Australia

Many Lithuanians and Poles will know the story of Emilia Plater (Emilija Pliaterytė in Lithuanian) a young countess of the Plater nobles who... 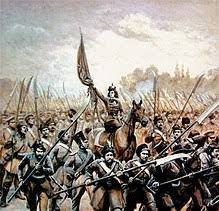 This blog seeks to explore the stories of those Lithuanians and their near neighbours (Jews, Poles and others) who originated in what is now the Republic of Lithuania and who arrived in Australia before the mass migration of World War II displaced persons - which started in 1947 - although I may occasionally cross over into their stories as well. The earlier arrivals were generally the subjects of czarist Russia (1795-1917) or citizens of independent Lithuania (1918-1940). Some migrated to Australia intentionally, others came accidentally; some travelled directly, others arrived here from Scotland, the USA or other countries.