The story of Paul Ephriam Zundolovich is one of the most remarkable stories of early Lithuanians in Australia that I have encountered.  For he was a Lithuanian Jew who not only became a Catholic priest - in itself this would have been highly unusual - but he also became one of the most respected pioneer priests serving outback and rural Australia.


His life was briefly summarised by Father T J Linane in From Abel to Zundolovich, Vol 1, 1979:


Paul Zundolovich ... was singularly a Lithuanian Jew, a convert to the Faith in Egypt, and recruited for the Wilcannia-Forbes Diocese by Bishop William Hayden.  Ordained from Propaganda College, Rome, in 1891, Paul served in unglamorous places for over 40 years, dying at Moama in 1935. 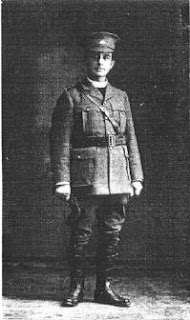 This photo of 'Father Paul', as he was widely known, during the First World War is from the first page of From Abel to Zundolovich, Vol 1.


Not much is known of Zundolovich's early life.  According to his WW1 attestation papers he was born in Mosėdis, Lithuania (he wrote this as 'Maished' - the yiddish version of Mosėdis - in the Telšiai district of the Kaunas gubernia) on 15 May 1865.  Somehow as a young man he found his way to Egypt, or perhaps Palestine, and converted to Christianity before undertaking theological studies in Rome.

He arrived in Sydney aboard the Austral in 1892 as a missionary priest and was despatched to Broken Hill, during or immediately after the 1892 miners' strike.  While in Broken Hill he probably had ample opportunity to make contact with the Lithuanian Jewish community there.

The rest of his life revolved around his priestly vocation, primarily in western New South Wales.  In 1895-96 he served as a chaplain at the Wentworth gaol, and by 1898 he was naturalised as a British subject and living at Wilcannia, responsible for the Wilcannia and White Cliffs region where he would remain for the next 15 years apart from annual breaks in Broken Hill.  In 1908 he travelled overseas to North America, and probably also to Europe.  In 1915 he was appointed to the town of Hay but that posting was to be of only short duration as he enlisted in 1916 to serve as a chaplain on AIF transport ships between Australia and Europe.  He was appointed to the parish of Moama in 1917 which he served until his death in 1935.


Posted by Jonas Mockunas at 21:40 No comments:

Email ThisBlogThis!Share to TwitterShare to FacebookShare to Pinterest
Labels: Zundolovich

Much material on Lithuanian migrants in South Australia has already been published by Daina Pocius on her South Australian Lithuanian History blog (SAlithohistory.blogspot.com).  Daina has been posting since January 2008 and has amassed a huge amount of information; her blog was listed as one of the "50 blogs you need to read" in Inside History magazine's 2014 annual genealogy blog awards.

So, rather than replicate what has already been published on the SA Lithuanian History blog, what follows here is a brief commentary and summary of early Lithuanian migration to South Australia.

Lithuanian histories in South Australia before the First World War are problematic:

Previous posts have looked at the Lithuanian Anzacs who reached South Australia in the second decade of the twentieth century and enlisted there:

Of these, only Stanley Žygas settled in Adelaide after the war.

Nevertheless, there are fragments of information which show an earlier presence.  Previous posts have looked at nineteenth century settlers from the Memel (Klaipėda) region who came to South Australia, such as John RUSSELL (arrived 1859) and Otto REIGERT (married at Light Pass in 1886).  Later arrivals with links to Lithuania include:

Metraštis No 1 (p11) refers to a 1953 article in Mūsų Pastogė which reported that there had been Lithuanians living in Adelaide in 1930 but that unemployment, poverty and hardship had forced most to move to the eastern states; by the early 1950s there were only a few of the early Lithuanians remaining in Adelaide.

Kazys Brazauskas was possibly the first savanoris (volunteer fighter in Lithuania's battles for independence 1918-20) to settle in Australia.

The Australian Lithuanian chronicle Metraštis No. 1 records the following about him:

Kazys was born on 15 December 1898 in the town of Serėdžius in Lithuania.  His father had emigrated to the USA earlier and Kazys and his mother followed in 1912.

Kazys returned to Lithuania, joined the fledgling Lithuanian air force in 1920 and served there for two years.  He was decorated with the Volunteers Medal in recognition for his service during the struggle for independence.

In 1927 he emigrated to Australia, first settling at Port Kembla where he was employed as a technician at the power station.  He was unemployed for a while during the Great Depression, found work as a taxi driver in Sydney, and after a while was re-employed by the power station.  In 1932 he bought 7 acres at Engadine, south of Sydney, and built a home; in 1950 he purchased a 3 acre farm also at Engadine from which he earned a living growing flowers.

Kazys served as president of the Australian Lithuanian Society in 1939, the year in which the Society celebrated its 10th anniversary;  the celebrations were held at the Brazauskas property at Engadine.   His wife Jadvyga was also a member of the Society.

The Lithuanian volunteers site (http://www.versme.lt/sav_b.htm) has a few more details about his place of birth and military service:


The participants convened at the Port Kembla home of the Australian Lithuanian Kazimieras ('Keys') Brazauskas.  No action, however, was taken to create a Lithuanian parish in Sydney as the Lithuanian migrants (relatively few in number) did not live in any particular area of the city.

Kazys Brazauskas died in 1980, aged 82, at Maclean in NSW; he was buried as Kazys Braz.  A public family tree on Ancestry.com.au records that:

This photo, courtesy of Metraštis No 1 (p15), is of participants at the 1934 Lithuanian Independence Day celebrations in Sydney, organised by the Australian Lithuanian Society:

Presidents of the Society included:

The Honorary Latvian Consul, J McLeod, who was British by birth, was also the official representative of the Lithuanian government in Australia.  Consul McLeod and his wife began attending the Lithuanian Independence Day celebrations in 1934, and continued to be popular guests of honour.  From 1937 onwards the Estonian House in Sydney's city centre was used, as it was close to public transport and contained an auditorium suitable for banquets and concerts.

(source: J. Kunca 'Lithuanians' in J. Jupp (ed) The Australian people; an encyclopedia of the nation, its people and their origins, 2001, p570)
Posted by Jonas Mockunas at 18:27 No comments:

This photo (courtesy of Metraštis No. 1, p14) is captioned 'a group of early Lithuanians on a picnic': 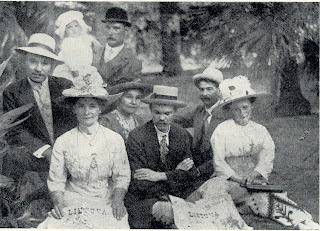 We know that John Wedrien (Jonas Vedrinaitis) and Alexander (Ksaveras) Skierys had written an article to Lietuva, which was published on 16 April 1915; see the posts of 5 March and 12 March 2015 for their stories, and that of 14 June 2019 for more about the article they wrote.

I'm confident the man on the far left of the photo is John Wedrien and that the man sitting in the front row (looking down) is Alexander Skierys.

It would be great to identify the ladies and the other two men in this photo.

Perhaps one of the other men was Jonas Mickevičius (known as John McCowage in Sydney)?

Metraštis No 1 (p8) recounts a few elements of Mickevičius' story as told by John Wedrien:

Other Lithuanians who were living in Sydney at that time included:

Posted by Jonas Mockunas at 15:52 No comments: