The port city of Klaipėda in Lithuania has a rich maritime history. Formerly called Memel, and part of the Kingdom of Prussia - and then Germany - until the end of the First World War, it had been a member of the Hanseatic League during the late Middle Ages and an important trading centre from its foundation in the thirteenth century.

In 2009 Klaipėda was one of the hosts for the Tall Ships Races that were held in the Baltic Sea that year. We were fortunate to have been there for a memorable weekend. 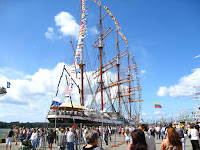 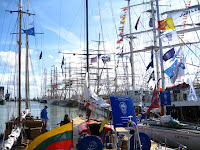 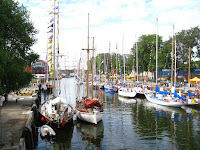 As well as inspecting the great array of tall ships and yachts we enjoyed visiting many of the special displays, including a well-presented series of municipal notice boards outlining the maritime history of the port. One in particular struck a chord as it mentioned that a Lithuanian seaman had been on the Moshulu's epic journey from Europe to Australia and back in 1938-39. The 30,000 nautical mile voyage on the four masted square rigged Finnish barque Moshulu was recorded by the British travel writer Eric Newby in his book The Last Grain Race (1956) which he later followed up with two photographic essays Grain Race: Pictures of Life Before the Mast in a Windjammer (1968) and Learning the Ropes: An Apprentice in the Last of the Windjammers (1999). 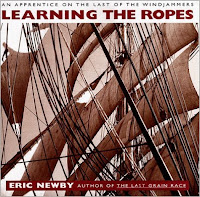 Having made its way to South Australia from the North Atlantic in late 1938 (the journey from Belfast to Port Lincoln took 82 days), the Moshulu was one of thirteen 3- or 4-masted vessels that anchored in Spencer Gulf over summer while waiting to take on grain for Europe. The 'Grain Race' was an annual competition between these great sailing ships to make the shortest passage back to Europe, and the 1939 race was to be the last one of that magnitude. The Moshulu won that race, making excellent time from Port Victoria in South Australia across the South Pacific and reaching Queenstown (now Cobh, Ireland) in 91 days.

Years later, Eric Newby wrote about the perils and difficulties of the voyage and about the Lithuanian, Vytautas Bagdanavičius, who shared that experience with him. The 1938 voyage to Australia on Moshulu was the second one for Vytautas; he had travelled with the ship "on the timber run from Finland to Lourenco Marques in Portuguese East Africa in 1937 before going to Australia for her grain cargo". Like Newby, Bagdanavičius had been taken on as an apprentice on the Moshulu; the two 18 year olds were to become close friends on the trip to Australia. Newby noted that "I had liked Vytautas from the start"; "he had a happy temperament that did not attract trouble"; and he was "by far the most resilient" in their small group of friends. Despite breaking his arm at the start of the voyage, Bagdanavičius continued and appears to have mentored Newby.

A recent (2015) publication from the Lithuanian Sea Museum in Klaipeda casts some more light on Vytautas Eduardas Bagdanavičius (born in Kedainiai in 1920). After serving on the Moshulu for two seasons, he studied at the Stockholm Maritime School 1939-40 before obtaining a position as trainee navigator on the Lithuanian steamship Šiauliai. Sadly, unlike Eric Newby, he did not go on to enjoy a long and successful career; the only further reference is that he disappeared in Leningrad during the Second World War, around 1942. Other sources state that Šiauliai was sunk in 1940 off the Estonian island of Hiiumaa (Dago island) but give no indication of the fate of the crew.

The Moshulu, however, survived the war. She is now enjoying her retirement as a floating restaurant in Philadelphia USA.

Posted by Jonas Mockunas at 17:33 No comments:

England was the intermediate point for possibly the largest number of early Lithuanian-born migrants arriving in Australia. Many sailed from British ports having spent a shorter or longer period in England during the late 1800s or the early 1900s.

Most stopped in London, often spending several years or even decades before moving on to the New World. Some came with their families, others sailed alone or with small groups of friends or acquaintances.

One of the earliest settlers was Jonas MICKEVIČIUS (John McCOWAGE). The Australian Lithuanian Yearbook Metraštis (1961) notes that he arrived in 1887 with his wife and children together with two other unnamed Lithuanian men.  The two other men returned to London within a few years but Jonas and his family decided to settle in Sydney.  Family trees on Ancestry.com provide some more information: Jonas was born around 1855 in Suwalki (now in northern Poland, close to the Polish-Lithuanian border); and he married Morta Tuinyla in Fulham (London) around 1883. After migrating to Australia, Jonas worked as a greengrocer, eventually acquiring a stall at the Municipal Markets. Morta died in 1899 and Jonas in 1918; Metraštis records John Wedrien's account of meeting Jonas Mickevičius at the Sydney markets in 1914; Wedrien was apparently the first Lithuanian that Jonas had met in 23 years.

Michael Henry FRUMAR was born in Vilnius in 1885. A Lithuanian Jew, he had arrived in London shortly after 1900 and, in 1908, migrated to Australia aboard the Nairnshire. He settled in Sydney where he became a self-employed 'mantle and costume manufacturer' with premises in Pitt Street. Michael was naturalised in 1940 and died in 1949.

Others who arrived in Australia after spending some time in England included:

Posted by Jonas Mockunas at 22:44 No comments:

The previous post about Harry ALEXIS/ALEKSIUNAS who had lived in the Atherton area of far north Queensland for over 30 years until his death in 1950 prompted me to revisit what we have discovered so far about early Lithuanian settlers in Queensland.

The Australian Census of 1933 - the first one to specify "Lithuania" as a place of birth - recorded 15 people in Queensland who had given that as their place of birth (12 males and 3 females), while the 1947 Census recorded 21 people (13 males and 8 females);

These census records provide us with a minimum number for the Lithuanian-born, as some people who had been born before independence in 1918 would likely have recorded their birthplaces as Russia or Germany.

Many Lithuanian-born migrants appear to have settled in regional Queensland, not in the capital city of Brisbane. Metraštis (the Lithuanian Yearbook, 1961) reported EC Phillule's advice that by 1938 there were only two Lithuanians living in Brisbane, although there had been more previously.

However there were also some examples of family and chain migration:


Arrivals on the SS Haitan

In the early part of World War 2 (1940) a group of 32 Lithuanians with British citizenship arrived in Brisbane as part of a larger group of evacuees following a journey from the Baltic States across Siberia to Vladivostok, Hong Kong and finally Australia. Theirs is an epic story which has been researched by one of their descendants, Eve Puodžiunaitė Wicks.

The evacuees remained in Brisbane for the duration of the war, but largely dispersed once hostilities had ceased. The Courier Mail of 18 February 1941 included this story:


Social and Dance: Lithuanian national dances were a feature of the programme at a social and dance held in the Danish Hall, South Brisbane, last night by the British-Lithuanian evacuees. Lithuanian songs were given by a mixed choir, and others who contributed items were Mrs Balcunas, Mrs K Puodziunas, Misses Lena Ruskey, M Massey, F Kdesnikas [sic], A Grey, and F Kolesnikas.


Party for Evacuees: Nearly 600 guests ... were entertained yesterday at the New Settlers' League's Christmas party for migrants and evacuees, at the Railway Institute. The oldest guest was Mr G P Page, who is 78. He formerly lived in the Baltic States. ... Other guests were from Great Britain, Poland, Latvia, Esthonia [sic], Lithuania, Roumania, China, Malaya and Darwin. Each child received sweets from the Christmas tree.

Alice Blanch CHEHOVSKI was born in Brisbane in 1921 to a Polish father and Russian mother. Her father died soon after and her mother took Alice back to Europe: she lived in Lithuania from approximately 1924 to 1981, studied art in Moscow, and returned to Australia in 1981. She was an active artist in Australia, with several of her paintings (including works completed in Lithuania) collected by the National Gallery of Australia. Alice died in Victoria in 2015.
Posted by Jonas Mockunas at 20:00 No comments: