Around 100,000 people emigrated from Lithuania during the interwar years, mostly for economic reasons, The peak period for emigration was 1926-1930, with an estimated 60,000 leaving. Most made their way to South America but at least 50 that we know of, and probably many more, reached Australia. Petras Stasiunas was one of these young migrants who had been born in czarist times, experienced the First World War and the birth of independent Lithuania, but had decided to leave in the late 1920s.

Born on 5 August 1898 to the north of the town of Pašvitinys, Petras appears to have spent his first 30 years in Lithuania and to have participated in the Wars of Independence (1918-20), but on arrival in Sydney aboard the Orontes from London in 1929 his occupation was listed as farm labourer. He settled in Newcastle and within a few years appears to have become relatively successful, being listed as a motor tyre dealer ('Peter's Remoulds') in the mid 1930s. 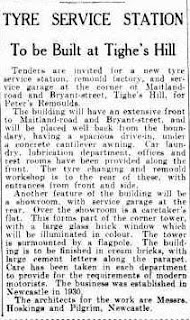 
Petras kept in touch with his compatriots in Australia, participating in the activities of the Sydney-based Australian Lithuanian Society, and in 1937 traveled overseas to visit Lithuania.  He was still a single man at this stage, and may have returned 'home' to find a wife. If so, that quest was unsuccessful - or the Second World War may have interrupted plans - and in 1941 Petras married a Newcastle woman (Kathleen Comerford). That marriage, however, was short-lived and divorce soon followed.

By the late 1930s Petras had improved his standing and had built a tyre service centre in Newcastle at a cost of over 2000 pounds (Peter's Tyre Service at Tighe's Hill). He had also become a naturalized British subject (1939), changed his name by deed poll to Peter Stanton (1940), and offered himself for army service at the start of the war.

The war years may have adversely impacted the service station business because during that period Peter returned to his earlier occupation - farming - purchasing a property at Louth Park, near Maitland. In August 1948 he married a second time; this time he chose a newly-arrived Lithuanian refugee, Ona Venclauskaite (born in 1928, she had arrived in Australia only in February 1948). Sadly, their marriage did not last long either as Peter died in June 1949 at Maitland after attending to flood damage on his farm. He left a wife and a son.

An obituary was published in Mūsų Pastogė on 6 July 1949, including the following details (my loose translation):

One of the older Australian Lithuanians, Petras Stasiunas-Stanton, died on the 28th of June in Maitland. The deceased was 53 years of age, born in Kriukų county, and had been a volunteer [in the Wars of Independence]. He arrived in Australia in 1929 and settled in Newcastle, working in those difficult times for one and a half pounds a week. Nevertheless he managed to save and get ahead, securing his own tyre repair workshop. During the last war he bought a farm at Maitland, where he lived until his premature death. He had married a new Lithuanian migrant only about 8 months ago; a conscientious Lithuanian, even though living far from any community groups he always cared about their activities and often supported them financially (Written by Antanas Bauže).