An earlier post https://earlylithuaniansinaustralia.blogspot.com/2015/08/sydney-lithuanians-1914.html dealt with early Lithuanians in Sydney around the time of the First World War and included the photograph below. I had mentioned that they had written an article to the American Lithuanian newspaper Lietuva, which they are displaying at the base of the photo, and have now tracked down the article which provides some more detail about their lives here. 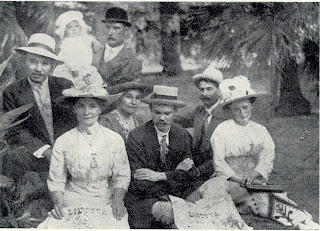 Lietuva (meaning Lithuania) was published in Chicago from 1892 to 1920. The article from Sydney was published on 16 April 1915 (not in 1914 as previously thought) and sets out what the authors knew about the small number of Lithuanians in Sydney at the time: