Another recently published book is a great source for understanding the context of early Lithuanian emigration. The Great Departure: Mass Migration from Eastern Europe and the Making of the Free World by Tara Zahra (2016, W.W. Norton and Company) deals with the growth of "American fever" in, and emigration from, two of the largest empires in Europe - the Austro-Hungarian Empire and the Russian Empire. 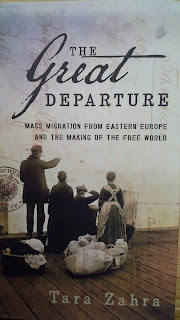 The scale of these migrations was massive: an estimated 55-58 million Europeans moved westward to North and South America in the period 1846-1940, and another 46-51 million left via Manchuria, Siberia, Central Asia and Japan.

By the end of the 1800s emigration had become big business, "littered with opportunities for exploitation and profit". If they made it safely to the Atlantic seaboard, the most common departure points for East Europeans were Hamburg and Bremen, followed by Rotterdam, Antwerp and Liverpool.  As well as the huge risks faced by the individuals involved, Zahra documents broader concerns: depopulation and social unrest in the east and the push for greater regulation and control in the west.  An interesting example is that from 1892 Germany set up delousing and disinfecting stations along its borders with Russia and Austria-Hungary in an attempt to control the risks to public health.  In 1901 the Hamburg America Line (HAPAG) constructed a dedicated migration depot outside the city, the intention "was to completely isolate East European migrants from the German population"; by 1906 there were 1,186 emigrants in residence, divided into 'clean' and 'unclean' sections and subject to daily medical examinations.

While much of the book deals with those departing the Austro-Hungarian empire for the American dream, there is also much useful information regarding the experience of Russia's subjects: