Blogs about history can easily become dull and dreary, at worst just a recitation of names and dates without much feeling or first-person involvement. That is why I was so fascinated to get this contribution from Zydre Pember. The memories recorded here, of post World War 2 migrants meeting Lithuanian families who had already been settled in Australia for decades, are important contributions to our shared history. Thanks, Zydre!

My mother, stepfather and I disembarked at Freemantle, Western Australia, from the Amarapoura, out of Naples, in July 1949.

Dad and I were taken, along with all the other migrants to Greylands' Migrant Camp, while mum was taken to Royal Perth Hospital. In the early stages of pregnancy she had suffered the combined effects of morning and seasickness, lost a lot of weight and was very weak. She needed medical attention.

Admission to hospital was a disaster for mum as she did not speak or understand English and Lithuanian interpreters were rather scarce on the ground. Amazingly there was a lady in the hospital, Anne, who had migrated, with her family, to Western Australia in 1928 and she still spoke some Lithuanian. Anne was Rosemary’s aunt and Rosemary remembers visiting with her mother, Anele. Apparently Anne told her sister, Anele that a Lithuanian had been admitted who did not speak English. Anele, who was mobile and whose Lithuanian was better than Anne’s went to see Mum and thus the communication problem was solved. I would venture to say that neither Anele nor Mum thought they would meet again.

After Mum recovered she was discharged to Greylands and eventually, Dad, with us in tow, was sent to work out his contract on the railways, based in the small country town of Corrigin in the wheat belt. Well, what a coincidence as this was the town where Anele, married to Heawood Abe and their two children, Roy and Rosemary, lived. How contact with the Abe family was reestablished is unknown to me. What I do know is that Rosemary and her mother came to visit us at the Migrant Camp (Tent City, as we all lived in tents and did so until about 1952) across the railway track from the actual town.

My brother was born in February 1950 at Corrigin Hospital and was the first New Australian to be born in the town. Perhaps because of Anele's influence through the CWA there was a collection by the townspeople and mum was presented with a pram.

Meanwhile, while mum was in hospital (in those days, after a confinement, a hospital stay of 2 weeks was mandatory) I was boarded with the Abe family. I don't remember all the details of my stay, but do remember the farmhouse and the surrounding home paddock. Apparently, I never shut up, talking, no doubt, in Lithuanian. Mrs Abe called me the Chatterbox and I wonder now what Roy and Rosemary made of this jabbering stranger thrust into their midst.

In 1954 we left Corrigin to live in Perth and gradually lost touch with the Abe family. Still it seemed that fate had plans for our continued relationship.

In February 1965 I was enrolled as a trainee nurse at St John of God Hospital, Subiaco, a suburb of Perth. In those days all trainee nurses were required to live in the Nurses’ Home for the duration of their 3-year training period. There was a welcoming afternoon tea for new trainees, to which all parents were invited. Mum and Dad were with me at that event and we were absolutely amazed to discover Rosemary and her parents also present, as Rosemary was also part of my intake.

Three years later, Rosemary and I, along with the rest of our class, graduated as Registered Nurses. Our paths diverged then, with Rosemary travelling to Scotland to get her Midwifery Certificate, while I married and found myself in Canberra, along with my husband.

Intermittently, throughout all of these years, Rosemary and I have kept in touch. She has sent me the details of her family tree, as she knows it. Her mother Anele, lived past her 100th birthday and received a telegram from the Queen.

I often think about our connection and try to fathom whether it was coincidence or fate. To meet this family once could be called a coincidence, but to connect a second time and then a third time down to the next generation, surely must be fate. To what purpose is still to be discovered.

Rosemary has given me information about her mother's family. Their family name was Lazoraitis, which they subsequently changed to Brown.

Vincas Lazoraitis was born in 1856 (but the date is not certain) in Pilviski. He enlisted in the Russian Army on 30 November 1877 (Number 1354). He had married Agota Valaitis and on 29 September 1877 they had a son, Juozas, who was Rosemary's grandfather. 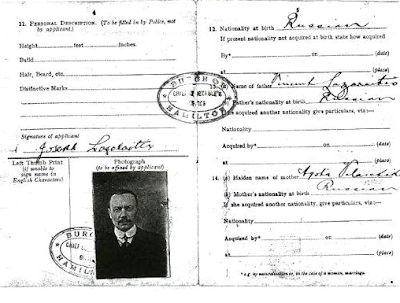 Juozas Lazoraitis arrived in Eddlewood (near Hamilton), Scotland in 1895 and worked as a coal miner at Allanton Colliery. He married Magdelena Palubinskaite on 3 February 1906, in Hamilton, Scotland. They lived at 15 Wylie Street Hamilton and had six children; 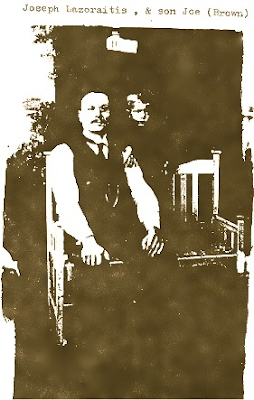 Juozas then married Ona Kucinskiene (nee Ruguviciute) – her husband had disappeared while fighting in Russia) - on 17 May 1919.

Ona already had a child (Agnes), and she and Juozas then produced 6 more children.

On the 22 February 1928, the family migrated to Western Australia aboard the SS Beltana (voyage No. 36).

Juozas' daughter Olese had preceded them in 1924, on the SS Hobsons Bay. She either encouraged or sponsored the family to follow in her footsteps.
They lived at 74 Planet Street, Perth, at least for a time, then moved to Victoria Park. Juozas was naturalized on 05 July 1930 and died in Perth on 30 August 1943.

Anele (Rosemary's mother) married Heawood Abe, a farmer from Corrigan, on 6 July 1940. They had two children: Roy and Rosemary.


Tragically Roy was killed when he was 18, in a farm accident. Rosemary married and has 7 children and 10 grandchildren and now lives in Newcastle, NSW.